The Middle: One another retreat

On September 26-28 we took 38 of our students and leaders to camp Iliana for a retreat. Friday night we got there ate some pizza, played some games and then went into session to talk about the theme.

The next morning we had some breakfast and headed out to the camp grounds and played some Ga Ga ball for a while before our second session. Seth won the last game of the morning and had a fantastic victory speech

Afternoon we played some volleyball, some gag a ball and then we went to the ropes course and the zip line! We had a blast!

Session Three: Forgive one another. Another part of being the church and living in community is forgiving one another. And this is so much harder than it sounds. The story of the man who owned the king money, way more than he could ever pay back and the king forgave his debt even though he did not deserve to be forgiven. This same man right after this interaction of forgiveness with the king went to someone who owed him and dragged them to jail for not paying him back. Either of the men deserved forgiveness, but when we get caught thinking we do deserve it, it effect how we treat others.

We had a camp fire and sang some songs and some smores then played some late night games! 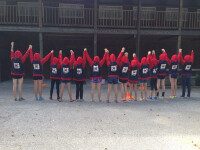 ed! In the Old Testament there is a story of Johnathon and his armor barer. When they were going to be attacked by the Philistine army Johnathan knew they couldn’t just sit around and accept it. Johnathan talked to his armor barer about going to fight and his armor barer said “I’m with you heart, and soul” long story short, they go to battle and win! We are called to be like this armor barer, with one another heart and soul to accomplish things that are so much bigger than us because God allows us to do these things together.